In 2014 I was able to attend the Babywearing VIP with Beco and Ergo at MommyCon. Flashing forward to 2016, I thought I would give it a shot again and do the VIP again, which was again hosted by Beco and Ergo.

Registration for this event was easy, you walked up, handed it your ticket and received a bag with a soft-structured carrier from either Beco or Ergo, and a few other goodies. This was a different approach than in my previous experience, but this was a better approach than picking and choosing your carrier based upon which brand ticket you received. This reduces the chaos.

The event leads of this event were Laura Brown from Ergo, who is known to be a baby wearing educator to be reckoned with, and Angelique Geehan who was there as the representative to Beco. Laura Brown is pretty well known in baby wearing circles, and when in Anaheim during MommyCon 2015, there was a “What Would Laura Brown Do” party that seemed to be happening. Angelique was a new face for me, but she was thoroughly informative, even though I feel pretty confident in my Beco wearing skills. What was nice about this session in comparison to the session I attended 2 years ago was that this was really about learning to Babywear, versus just learning about the companies. In 2014, there were games about the company, but there were very few tips and tricks on how to use the carrier you were going to be going home with. 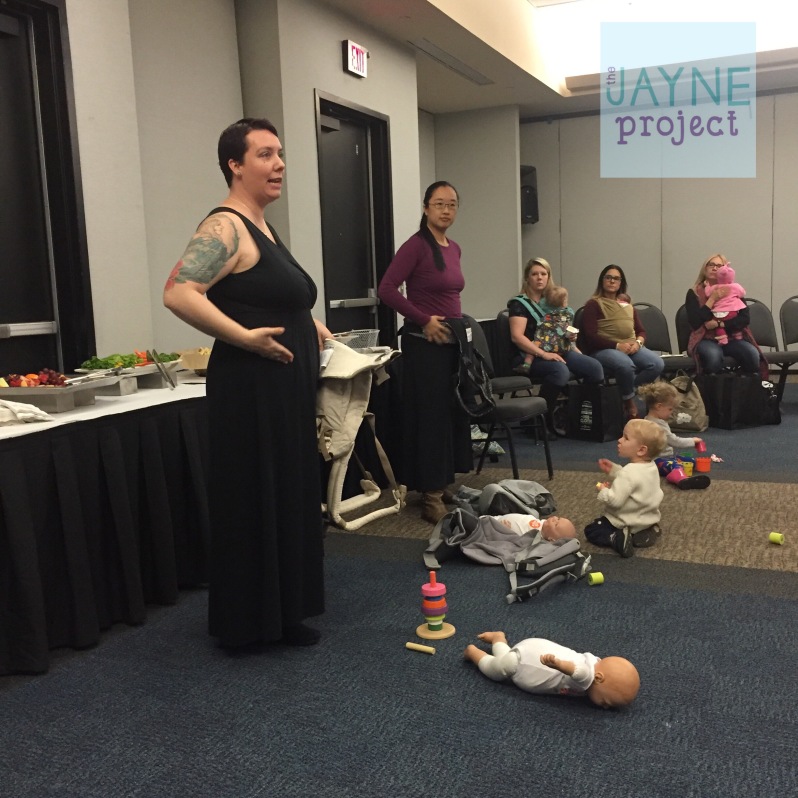 This was really a hands on informative seminar on how to get the best fit for your carrier. The nice part is that there was time to actually try the carrier you received on. The only thing about the session that bugged me was that because it was heavily sponsored by Beco and Ergo, there was no talk or information on anything aside from those brand offered soft structured carriers. Beco offers a fabric ring sling now too, so it would have been nice to see a demonstration on that product, but it was made clear by Laura Brown that since this was an Ergo and Beco sponsored event, the main talk would be on the carriers offered in the bags.

The fact that I have been baby wearing for over 6 years now and I was still able to learn some new tips and tricks means that the educators involved in this session are truly great educators. I was able to find a better fit for my ergo at my hips, and discovered a better way to adjust the safety clip when using an ergo on the front. So this was a highly useful session just for that. The most fun part of the session though, had to be the end of the session where there was a round of Heads Up, with flash cards that correlated to all the topics discussed during the informative part of the session. I think it brought the most laughs as strangers tried to describe to their partners different words and concepts. My favorite one is still, the word “bounce”, described as “How you calm a baby”, with the arm motions that received the answer “shaking”. The entire room erupted in that one. “Shaking” however came up twice as an answer during the game, and both times were different flash cards.

The interactive nature of the event drew me in more than the previous experience. I would recommend this event for someone who either is new to baby wearing or a first time mom who would like a more hands on approach to learning to use your carrier. The other thing about this VIP that brings value to the table for a new baby wearing parent/guardian is that for the price of $75 you are receiving a new carrier that average about $50 more than that, along with a lesson, snacks and fun accessories to go with your carrier. What is also great is that you are receiving the newest line of carriers from both brands. Fun prints and styles, there is a lot more variety than in 2014. My group of friends came home with no-two matching carriers. While the brand and style may have been the same, the prints were different.

There was no time to trade products and carriers though, so if you received girl accessories or a size too small, the event did not allot anytime to do tradesies with your neighbor. That would have been nice to have at the end so we could have received something you wanted rather than not. Our group would have really liked a Beco Soleil to add to the bunch.

If there was something I would have changed about the event, it would not be the event session itself, but a request to add a next level VIP. With Tekhni being a huge part of the MommyCon team, it would be nice to have a more expensive VIP session for the next level of baby wearing parents who are wanting to learn some new techniques or new style of baby wearing. While there is a wrapping 101 session during the main day of MommyCon, the lack of time, versus the amount of people involved didn’t give enough time to learn anything but the basics. Maybe MommyCon will consider a more expensive Take Home a Tehkni or other wrap carrier Baby Wearing VIP session in the future for the next level of baby wearing parents.

The VIP session is a great way to get an intimate session with the baby wearing specialists who can help you find the right fit, and definitely worth the money if you are new to world of baby wearing or just new to Beco and Ergo. Going home with a carrier averaging $125 along with teething jewelry and sanitizer and a fun dinosaur hoodie and arm warmer accessory. If you are looking to use MommyCon to boost your exploration of carriers, this session is a must have. I would say any parent who is not yet familiar with baby wearing or is a new parent to be should attend this VIP.